Food
Grain Free
Whole prey and high-protein diet: what it is and its top 3 health benefits
.
Home
4 Environmental Health Hazards Your Dog Might Be Exposed To
Beginner
Junior Pet's Health
943 views

4 Environmental Health Hazards Your Dog Might Be Exposed To

In a densely-packed city such as Singapore, it is sad to say that our dogs aren’t living in the most ideal conditions. Apart from the common ticks, fleas and ring worm problems, there are many lesser-known environmental hazards that your dog might be exposed to. Here are a few that you should take note of.

Read more: Is Smoking Around Your Pets Harmful To Their Health

Poisonous chemicals used in insecticides and herbicides can be harmful to your pup. Dogs that come in contact with such chemicals have been known to contract bladder cancer. This happens when they lick the chemicals off the grass or their paws and ingest them. If you own a garden, avoid using any form of insecticide or herbicide on your lawn, especially the 2,4-dichlorophenoxyacetic acid (2,4-D) -a common herbicide known for its harmful properties to pets and children. While on walks, try to keep your dog from licking the grass and plants excessively if you aren’t sure if chemicals are used in that area, and make sure to thoroughly clean their paws once home.

It is important to note that despite the above pointer, the solution is never to disallow your dog from going out and getting some fresh air. As animals, dogs are naturally drawn to the sights and smells of nature and it is essential that they have time outside every day. This not only benefits their mental health, but their physical health as well.

A study published in Nature’s Scientific Reports Journal, conducted in Finland, found that dogs living in rural areas are less likely to develop allergies compared to dogs living in urban areas. Curiously, this association has also been found in humans. Though most of us don’t have the means to move, Singapore has plenty of parks and dog runs for our dogs to enjoy. 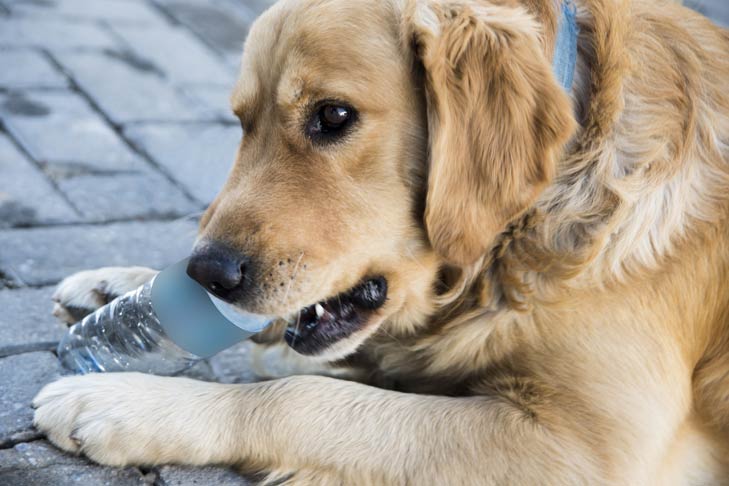 With the many environmental threats caused by plastic, it is no surprise that our dogs aren’t safe from it either. Plastics are found all around us and our dogs: they are used in canine toys, bowls, and have even been found in canned dog food.

But what exactly is so harmful about plastic? There’s a chemical compound, bisphenol A or BPA, that plastic manufacturers have been using since the 1960s to coat plastic products. BPA was found to make plastic more resilient against damage, which we now see the detriments of today. Studies have shown that when our dogs ingest BPA in sufficient levels, the compound disrupts endocrine systems, resulting in reproductive and immune system abnormalities. While more research still needs to be done, it is best to avoid plastic altogether by using metal bowls and toys made of natural fibres. Canned food is also greatly advised against.